According to the founding families, there are two conflicting stories about how pickleball got its name. Was it a beloved family dog named pickles or a popular racing boat? Pickleball was created around 60 years ago. As human beings, we are great at improvising. Certainly, this is what happened in 1965 when pickleball history began.

According to the founding families in 1965, the game was created by three fathers looking to have family fun. They first played pickleball using a badminton court and ping pong paddles. The first permanent court was constructed in 1967, and the sport became official in 1972 with the creation of Pickleball Inc.

We break down the facts, myths, and how it has become the fastest-growing sport in America. Let’s Jump In!

After Joel Pritchard and Bill Bell finished playing golf in Bainbridge Island, Washington, they returned home to find their families and friends sitting around. The two dads were determined to get the kids out of the house and have fun.

The Pritchards had a badminton court on the property, a popular sport at the time. They tasked the kids with coming up with a game. Ping pong paddles and an old plastic baseball were used to play early on. However, it became an adult activity very quickly as opposed to a kid’s activity. The kids have been pushed aside. The adults were having too much fun.

Barney McCallum reminisces that the next day he couldn’t get out of bed quick enough to get over to the court. Friendly arguments filled the weekend over the rules, scoring, and anything else that arose during gameplay. One such rule that developed in those first days was the non-volley zone. Dick Brown was a large man at 6’5, he would run up to the net and slam the ball over the net, creating an unfair advantage. So they created the 7-foot section in front of the net known today as the “non-volley-zone”. 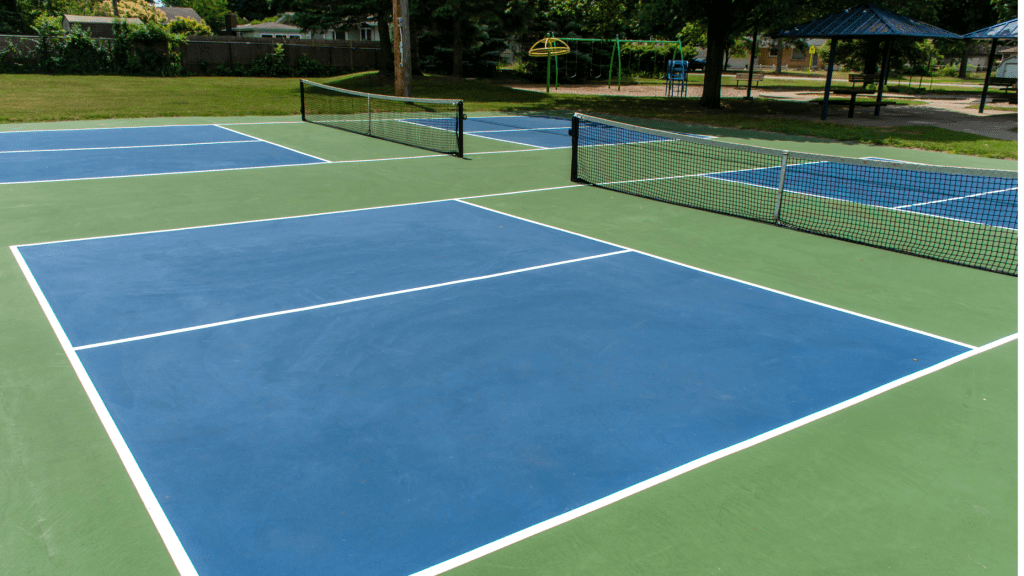 In the beginning, the net was set to the same size as badminton, as they quickly realized it needed to be lowered. As a result, they eventually settled on the height of Joel Prichard’s waist, which was 36-inches. When the net would start to sag, Joel would adjust the net by walking over and lining it up with his waist.

In those early days, paddles were cut out of plywood in McCallum’s backyard shed. Surprisingly modern-day pickleball paddles still resemble that same shape.

Pickleball History: The Move Off The Island

As the summer continued, more families and friends were invited over and taught the game. The Island was a tight-knit community, and pickleball was the talk of the town. As the summer came to a close and families left for school and return to work, pickleball moved to Seattle.

As did everyone, McCallum wanted to keep the fun going. He attracted all of his neighbor’s attention as they played outside their house on the street (A city street was 20 feet wide, hence the pickleball court size). One family friend that often played at McCallum’s house was father Finnier, who was president of Seattle University at the time. Father Finnier set up a weekly game at the university and exposed hundreds of people to pickleball.

Undoubtedly, another instrumental fact that exposed more people to pickleball was Joel Prichard. He was running for congress in Washington at the time. Joel would set up a pickleball court at all of his political events, he would announce over the microphone the rules of the game, and gather willing participants. Another influential person played early on, he was the president of the New York Times. He sent a reporter to Seattle to play the game and write a piece on pickleball. 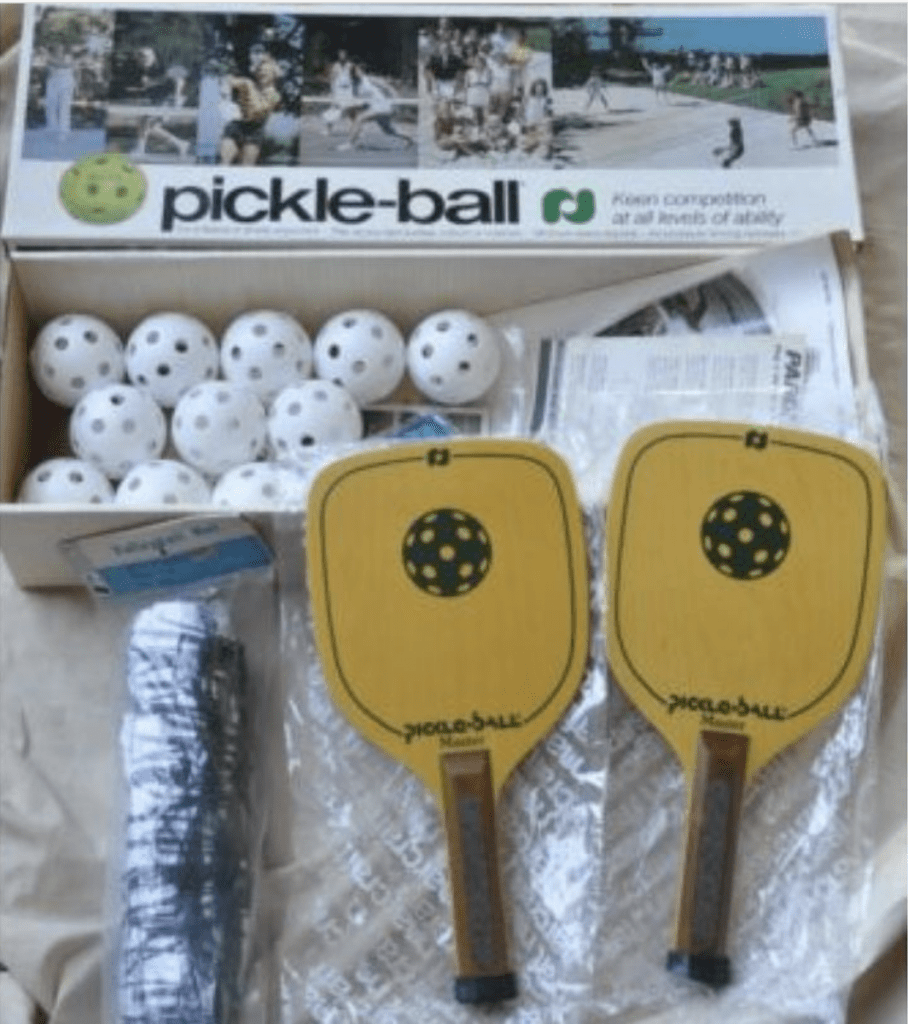 Pickleball Inc. was formed in 1972 after McCallum received phone calls and letters from people wanting paddles. The business was, in some ways, forced upon them; there was a need for equipment and pickleball sets. Joel, Barney, and Bill Bell wrote checks to form the company, a great moment in pickleball history.

The first pickleball sets included four hand-cut paddles, 4 Cosom Fun Balls, and a badminton net for $29.50. Once the New York Times published its article, orders started to pour in from across the country. After forming Pickleball Inc, the sport transitioned from a homegrown pass time to a legitimate sport.

Pickleball History – The 80s And Beyond

The 80s, 90s, and 2000 saw tremendous growth in the sport. Barney McCallum helped get the game in school gymnasiums across America. In 1984 the USAPA was formed to help spread the sport even more nationally; they published the first rule book that year. As a result, in the 1990s, pickleball was officially played in every state in America, only 25 years after it was created.

Pickleball was included in the Arizona Senior Olympics in the 2000s thanks to Earl Hill, and the first National tournament was held in Buckeye, Arizona.

Nowadays, pickleball is the fastest-growing sport in the United States and gaining popularity in countries across the globe. 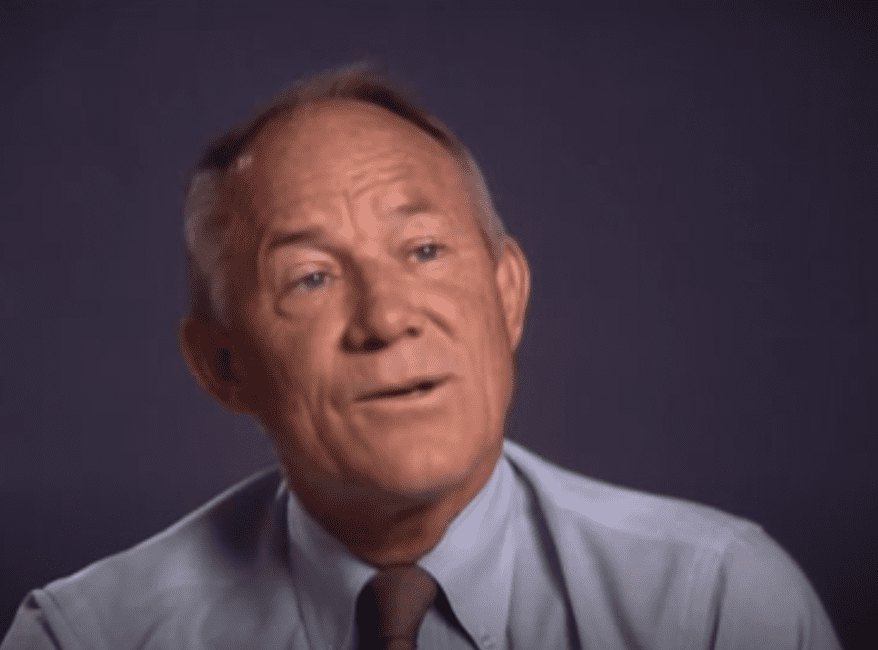 Who Were the Three Pickleball Founders?

Why Was The Sport Called Pickleball?

There are two conflicting stories about the origin of the sport’s name. On one side, Joel Pritchard, especially Joan Pritchard (Joel’s wife), credits the name to the pickle boats. According to Joan, pickleball reminded her of a pickle boat race from her college years. At Marietta, they take all the leftover row men and put them in a boat together, and race for fun. As it is a combination of badminton, ping pong, and tennis, it reminded her of pickle boats with all the different people, hence the origin of the name.

On the other hand, according to the McCallums and Browns, pickleballs originated from a dog named ‘pickles.’ According to the story, pickles would pick up the “Wiffle Ball” with its mouth and run off. As this became a habit, they decided to name the sport after the dog.

Although according to Prichard’s daughter, they got the pickles two years after the game was invented. While this is the most popular story on the origin of pickleball, it may not be the truth. 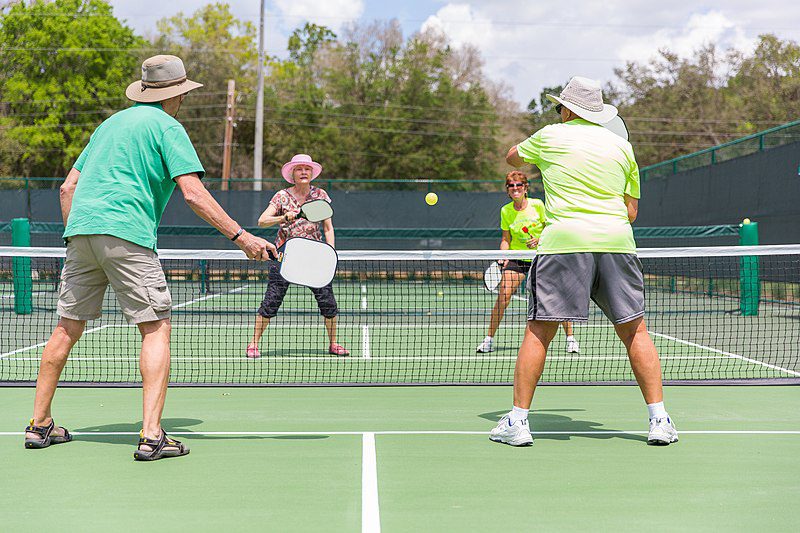 Why is Pickleball So Popular?

Over the past two years, pickleball has seen staggering growth. With a 40% increase in players over 2021 and 2022, topping 4.8 million people in America. While it has fewer players than tennis, pickleball is turning heads in the sports world.

Pickleball’s popularity today can be linked to some key things. The game is easy to learn and has a low barrier to entry. Furthermore, the equipment is relatively cheap (compared to other sports), and it’s fun for all ages. Seniors say it keeps them sharp-minded and works on hand-eye coordination and agility.

As you’ve learned, the game started from humble roots on Bainbridge Island, Washington. Its fast, exciting gameplay and quirky rules have given it a tremendous boost in popularity. Once you play pickleball, you’re immediately hooked on the sport! We hope you’ve enjoyed our post on pickleball history.

Finally, if you cannot find a pickleball court near you, check out our guide on finding a court and like-minded players in your area.

Want to learn how to play pickleball and the scoring system? We have some great posts!