Are you curious about the differences between platform tennis vs. pickleball? We’re here to help clear up any confusion and compare the two sports to see which is right for you. Although, we may be a little biased 🙂

Both sports are a lot of fun and can be played by anyone regardless of age or skill level. They both offer great exercise and fun, supportive communities. If you’re looking for an active outdoor hobby, then platform tennis or pickleball may be proper for you! I know some people might be here for the short answer, so I made a quick facts chart in the next section.

Let’s get into all the details!

First of all, let’s clear up some common misconceptions. Platform Tennis, the game with its origins in the New York Metro area, is played on a smaller court (20′ x 44′) enclosed by wire mesh walls and a synthetic platform. The platform tennis ball resembles a racquetball and is rubber with a lot of bounce. The game can be played singles (one player per side) or doubles (two players per side), much like traditional tennis.

A pickleball court is similar in size to Platform Tennis but isn’t as wide, with a solid surface and no walls. The pickleball used in this game has similarities to a whiffle ball and is played singles or doubles like Platform Tennis. Both Platform Tennis and Pickleball are growing in popularity as they offer a fun way for players of all skill levels to stay active outdoors. Check out the comparison chart below for some interesting differences between the two games.

What is Platform Tennis?

Unlike traditional tennis, it’s played on an enclosed court with a shorter and tighter net. The platform is raised to provide a way to heat the court to prevent snow and ice buildup. The game originated in the 1920s as a way for tennis players to stay active during the cold winter. In 1981, the American Platform Tennis Association was formed to promote and govern the sport.

One of the unique things in the platform tennis rules is that the balls are still in play when bounced off the wire fencing. Similar to racquetball and Padel, this makes for exciting gameplay and a fun strategy to work into your game.

Platform tennis is scored the same way as tennis in the game, set, and match format. Points are scored from love, 15, 30, and 4o to the game. The player who gets six games first wins the set (you must win by at least two games). Sets are played best of three or, in tournaments, sometimes played best of five.

Platform tennis is served overhand, just like tennis, but you only have one attempt to get the ball over the net to your opponent’s side. There is no Let system in platform tennis, so it’s one and done.

Platform tennis paddles might look strange to you if you’re familiar with other racquet sports, like tennis or badminton. Unlike a tennis racquet, platform tennis paddles don’t have strings, and the face was originally square and made of solid wood. At the same time, paddle technology has evolved significantly over the years. The 1990s was the first introduction of foam core technology; the Rich Maier’ Force’ signature model was an instant success. The foam core reduced vibration and added much-needed shock absorption to the platform tennis paddle.

Today’s paddles are made from many types of materials. The paddles used in platform tennis are made from high-tech materials like titanium, Kevlar, and graphite. The best companies create a solid, durable paddle that can withstand powerful swings, shock absorbent, and wicked winter weather. 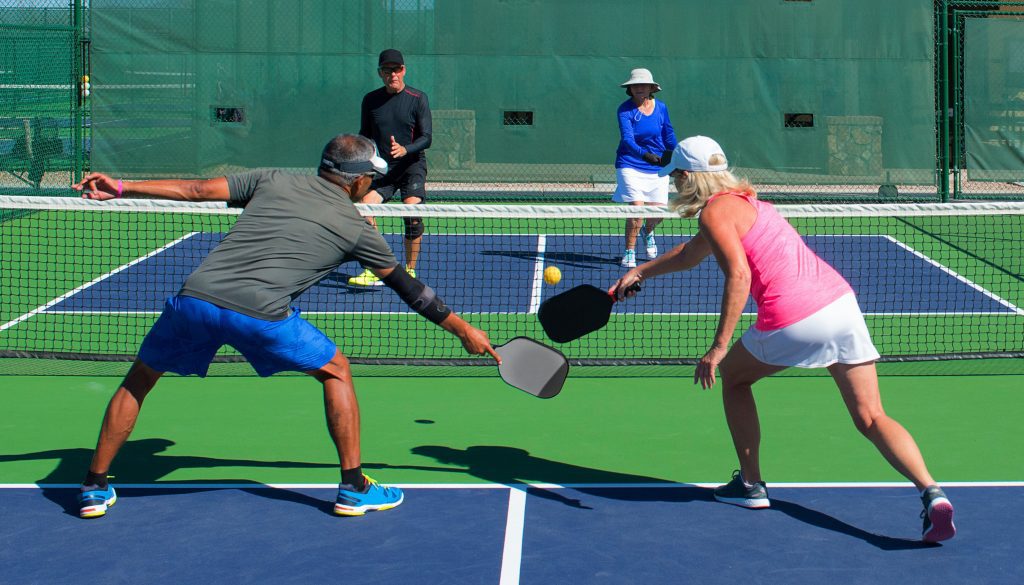 Pickleball is a paddle sport that combines elements of tennis, badminton, and table tennis. It’s played on a reduced-size court with a small plastic ball similar to a whiffle ball. Players use wooden or composite paddles to hit the ball over a 36″ high net, with a unique set of rules. Pickleball is played indoors and outdoors, and it’s gaining popularity as a fun and low-impact alternative to other racket sports. Check out our article on the history of pickleball and how it all began.

As we highlighted in the infographic above, platform tennis and pickleball differ significantly. Here are some key differences:

Is Platform Tennis The Same as Paddle Tennis?

While paddle and platform tennis may seem similar at first glance, they are different games. With all the other forms of tennis, the terminology is quite confusing. I ran across many blogs that mislabeled the games, adding to the confusion. They solved some of the confusion; paddle tennis was rebranded in 2015 and is now called pop tennis. Here are the main differences between the two sports:

In contrast, platform tennis is played on raised platforms with netting surrounding the playing area, much like a miniature tennis court. The game also uses unique rubber balls and smaller paddle racquets instead of paddles. So while paddle tennis and platform tennis may have some similarities, they are not the same game.

Is Padel and Platform Tennis the Same?

In Padel, the balls are first bounced on the court and served underhand to the diagonal side of your opponent’s court. A padel tennis ball is similar to a regular tennis ball but differs in the internal pressure or psi being less than tennis balls.

The walls on a padel court encase the whole court, meaning there is no space between the walls and the playing area. Another unique rule in padel tennis is that the ball is still in play outside the walls! They have large openings so players can run out of the bounds of the cage and hit the ball back into the court.

I haven’t played, but it looks entertaining and exciting!

My Thoughts and Conclusion

I hope we have cleared up a little confusion on platform tennis vs. pickleball, the differences, and the similarities; I know it took me a while to get things straight in my head (I may still be a little confused, haha)

So, which one is better? Platform tennis or pickleball? Pickleball may be the best choice if you’re looking for a winter sport that can be played indoors and outdoors. But if you don’t mind braving the cold and want to try something new, platform tennis might be more up your alley.

Whether a pickleball or a platform tennis player, the games are a great way to get outside and have fun.

Let us know what sport you prefer!

Read Next: Indoor Vs. Outdoor Pickleballs: What’s The Difference?

Read Next: Want a custom pickleball paddle but don’t know what to look for? Read This Guide